How often do you get to witness a total solar clipse, I bet not so often. But, on December 4, 2021, Antartica experienced a total solar eclipse and so far the only total solar eclipse in 2021 – the Moon was seen for about 2 minutes protruding from the Sun and some few persons were able to witness clearly this rarity of sight. While, towards the southern hemisphere some parts had witnessed partial eclipse around the same time. The eclipse reached totality at 07:44 Universal Time (UTC) and lasted within 2 minutes, causing darkeness in the Antarctic summer skies at a time when the Sun stays above the horizon for months.

The Sun, Moon, and Earth line up in same order a total solar eclipse, when there is a total solar eclipse, the Moon positioned in the middle of the Sun and the Earth. This allows the Moon to cast a shadow on some part of the Earth’s surface. If a person hazppens to live at the center of the Moon’s shadow, the Sun wholly or partially blocks them from view and the sky darkens. People who have some eyeshade on or its alternative apparatus as well as clearer skies can more likely observe the Sun’s corona(outer atmosphere) much better.

Thia is an image from the Deep Space Climate Observatory (DSCVR) photographed with the Earth Polychromatic Imaging Camera (EPIC) retrieved during the eclipse. From Lagrange Point 1, vantage point – the satellite shows a constant global view of Earth at a gravitationally stable point between the Sun and Earth at about 1.5 million kilometers from Earth. This view, was acquired at 07:58 Universal Time (UTC), the Moon’s shadow falls on Antarctica as shown in the image with the gridded lines.

Worthy of Note: there’s a slight difference in the amount of darkness sprawled from south to north, as the south-facing slopes receives some faint sunlight from the horizon. Notably, the polar regions have a rare sight of total eclipse such as the one experienced by Antarctica, this is usually because they comprise less of Earth’s land area and also because the Sun only give light on each pole for a short period during the year.

The last total solar eclipse in Antarctica occurred in November 2003. The next will occur in December 2039.

For further knowledge check in to NASA TV streaming for a video of the total solar eclipse—as seen from Union Glacier, Antarctica— the video duration is two-hours and filmed by members of the J.M. Pasachoff Antarctic Expedition, whohad also collected more data on electrical activity in the ionosphere during the same eclipse. 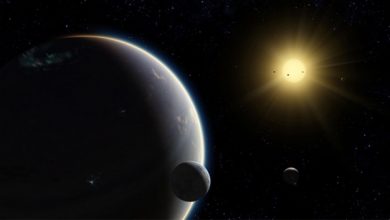